It’s late February, but last Sunday I watched with delight as my daughters played outside in the unseasonably warm weather. We just moved to a new neighborhood, and the warm weekend brought with it a surprise chance to meet some of our new neighbors who were also out to play. (I’d figured we wouldn’t see them much before the spring thaw of late April.)

It was 61 degrees here in Chicago, and the forecast says we’re in for a week straight of temperatures above 60. I love watching the girls play unencumbered by their winter coats and gear; but the farmer in me felt a lingering sense of fear alongside the joy. What might this unusually mild winter portend for the region’s farmers? Will the fruit trees put out their spring buds too early, only to lose them in a hard freeze next month, decimating their production for the season? Will the growers face a particularly tough year for pest and weed control, because the winter did not halt reproductive cycles the way it usually does in these parts?

I’m finding myself thinking about death a lot these days. Perhaps it’s because I’ve been to a lot of funerals this year. Or because Ash Wednesday is right around the corner. Or maybe just because it’s winter (despite the balmy temperatures), the trees are bare, and it’s the time of year when I know death does its most important work, naturally.

As I begin to turn my heart and mind toward Lent, I find I’ve got compost on the brain. On Ash Wednesday, we’ll mark ourselves with that most important truth, which we also recite in our funeral liturgy:

You only are immortal, the creator and maker of humankind;
and we are mortal, formed of the earth, and to earth we shall return.
For so did you ordain when you created me, saying,
‘You are dust, and to dust you shall return’” (BCP 499).

Ash Wednesday never fails to turn my mind toward the compost heap, where the waste of our daily lives–food scraps, fallen leaves, grass clippings, plant material–is slowly acted upon by nature, slowly transfigured into life-giving soil.

Ash Wednesday reminds me that someday my body will join that cycle too, and that it’s all part of God’s plan. It’s a hard truth to grapple with, and every time I think I’ve gotten a handle on it, I find myself blown over by the mystery of it all over again. 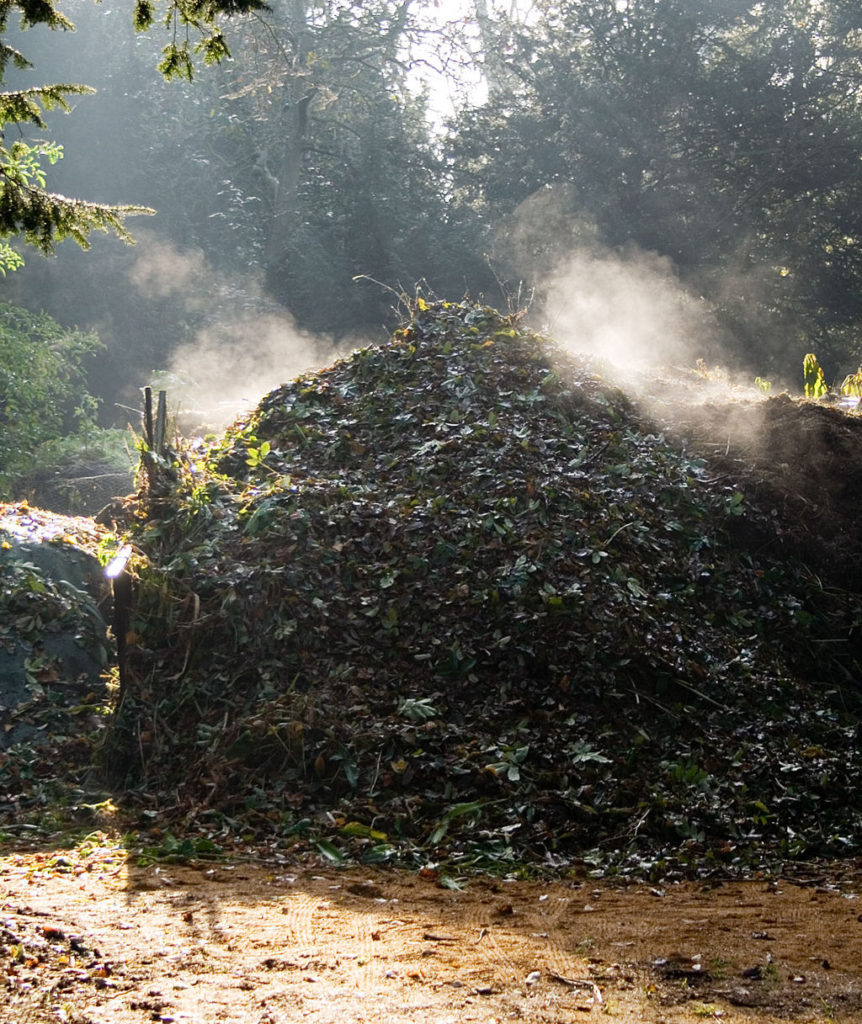 Compost heap on a frosty morning.

For my lenten discipline this year, I have decided to work on respecting death. I do not mean that I will banish the fear and sadness that I often feel around certain kinds of death–I don’t think I could do that if I tried. I mean respect in the sense of its root word: ‘respicare’–to look at, to see a thing for what it is. My hope is that, with one eye on my prayer book, and the other on the compost heap, I can come to respect the work death does for us… the life it enables to take root.

Lent is a season for repentance–for turning our hearts back toward God in the places they have fallen away. Compost needs to be turned from time to time, allowing air, sun, and water in, which will enable death to do its work. Jesus said, “unless a grain of wheat falls into the earth and dies, it remains just a single grain; but if it dies, it bears much fruit” (John 12:24). It’s a mystery I don’t understand, but that I stand in awe of.

With my family, I will start small. I will talk to my girls about compost. I will show them how our waste, over time, can be turned into something life-giving. We’ll put our hands in the dirt and talk about Ash Wednesday. We’ll try to pay attention, as the days get longer and the air gets warmer and color returns to fields and trees, to the work death has done to pave the way.

How do you feel about talking about death with children?

The Rev. Nadia Stefko is a recovering vegetable farmer and Episcopal priest. She serves as Associate Rector at Christ Church Winnetka. She lives with her husband and their two young daughters in Skokie, Illinois – in the Lake Michigan watershed.