Our calendar commends us today to celebrate the life of Harriet Starr Cannon and her founding of the Community of St. Mary, the first officially recognized monastic order of women in the Episcopal Church. There’s an anecdote that’s sometimes used to describe this founding, and it’s intended to illuminate something about Cannon’s character. The story goes that she left her smallpox patients only long enough to attend the founding liturgy and make her monastic vows, and then she immediately returned to her patients. This story is often quoted as a way to describe her devotion to charity and good works, but I find that I am more and more struck by the worship and prayer in the middle of the tale.

Cannon felt a call to something more ancient and more powerful than the women’s philanthropic organizations of her day. She felt a monastic call, to dedicate her life to contemplation and prayer, and the truth is that it brought her no end of trouble. She had been working as a nurse for years, and society seemed perfectly content with a woman devoted to charity. However, in becoming a monastic, a woman of prayer, she joined the proud ranks of women like Teresa of Avila and Hildegard of Bingen, women whose commitment and leadership assured a life-time of harassment.

The New York newspapers of the time accused Cannon and her sisters of being covert “Romanists” (reflecting the bigotry of the time in New York), and offered highly ‘colorful’ accounts of their lives. There was a formal demand (her biography does not indicate who brought it) to the bishop that the women’s private rooms and possessions be searched for illegal activities. Her early biography understates the way that her early community was mocked, calling this part of Cannon’s life simply, “The Persecution.”

When Cannon was caring for patients, she was lauded; in creating a society of prayer to support caregivers with a monastic vocation, she was vilified. She, again like Teresa of Avila, went on to found more successful communities, always proving herself excellent as a negotiator, fund-raiser, and ultimately Superior for the order.

What is so threatening about women who pray? I think that question sounds silly—except of course it isn’t silly. History provides many occasions when the leadership, authority, and prayers of women were seen as threats rather than gifts. 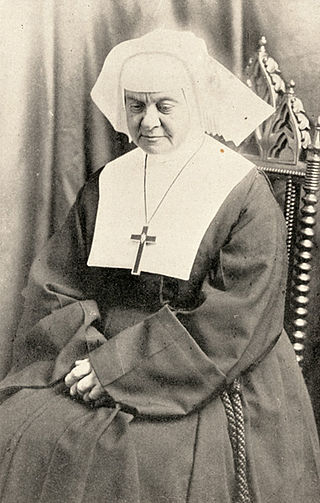 There’s something particularly important in the word pray. A brief look at the current Community of St. Mary’s website will point out that they are (still) a community devoted to contemplation and prayer, and this is the aspect that so worried Cannon’s contemporaries. For women to pray on their own suggested that they were whole human beings, children of God, worthy to be called friends of God. The act of prayer is empowering, and even New York society could feel it. This threatened (frankly, still sometimes threatens) the systems that would prefer to keep women on the margins of society.

I wonder if we pay enough attention to the radical power of prayer to humanize us—to our own self-perception, to the way the world sees us. I have taught the Lord’s Prayer to my small boys, and it’s a delight to hear them recite it in church or before bed. I wonder if I ever truly hear how radical it is. They are not dogs who have learned a trick. They are human beings, standing alive and beautiful before God, living into the calling that is theirs.

When we teach others to pray, we are opening a door to heaven rather handing on some words. Teaching others to pray is, in other words, a Big Deal. Even in spite of ourselves, we open up something real, or even Real.

Harriet Starr Cannon, and the group of women she helped found, who are probably praying even as you read this, call us to be mindful of the power of prayer. It is one of the most important things we teach, and its power is often grander than we imagine.