Jesus with gray hair? That’s not an image I’d ever imagined, not until my six-year-old granddaughter created one.

She came across line drawings of an icon I’d taken as handouts to a quiet day on “Silence and Slow Time.” I invited participants to silently color the icon while to listening for words Jesus might be saying to them, and then write those words in the open book.

Anastasia gave Jesus red and blue robes, a red and blue halo, a golden clergy collar, and brown skin. Then she went to work on the hair.

When she showed me the finished piece, her image of Jesus as an old man totally caught me by surprise. 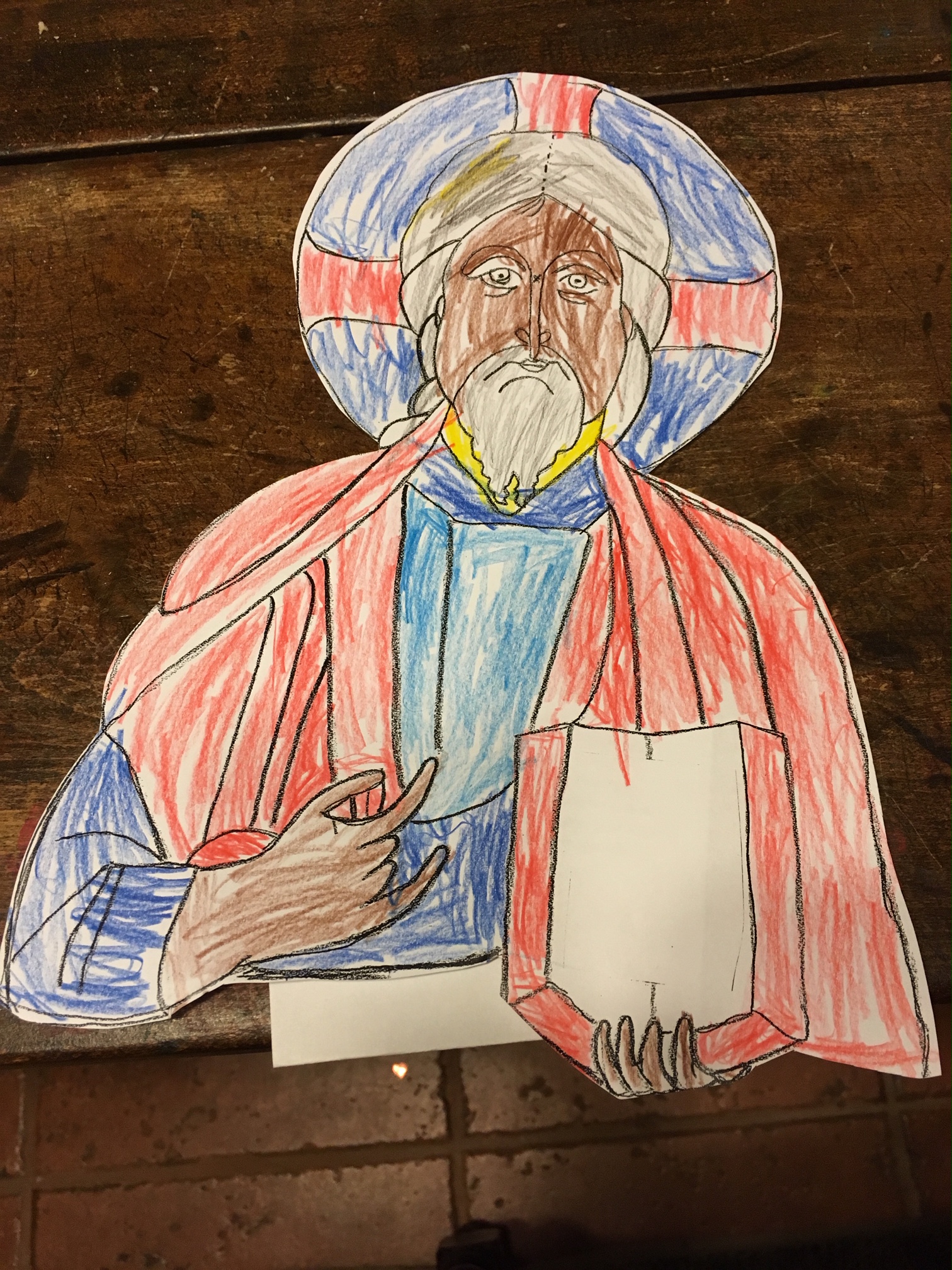 It shouldn’t have. She’s unchurched. She knows that we celebrate the birth of Jesus at Christmas. And she knows that he dies. But her own experience of death comes from the death of my father at 95, and the death of a beloved, aged dog. She’s learned that “everyone dies,” but it usually happens after a lot of years of living. So no wonder she assumed that Jesus lived to be an old man.

My 50th college reunion happens in just a couple of weeks, and since I’m co-facilitating a symposium on “Navigating Later Life,” I’ve become acutely conscious of my age, gray hair and all. Anastasia’s startling image of Jesus as an old man reminded me of what a gift these years have been, years that Jesus did not have. And I began to ponder all over again why he had to die as a young man.

Another symposium for the class of 1969 is titled “We Were Going to Change the World: What Happened?” The college library currently has a display of photos and news articles depicting our undergraduate years, years of protest and upheaval, despair and great hope. Despite the brokenness and cruelty of our current world, we continue to see this kind of passionate commitment in recent student-led initiatives and protests connected with such issues as climate change and gun control. I hope that those of us who rank among the elders can provide witness and perspective, but it is the energy of the young that often gets things done.

After all, Jesus wasn’t a wise old man sitting alone on top of a mountain, waiting for us to come to him. No. He may have gone up the mountain to pray, but he always came back down again to live right in the middle of the mess and chaos of humanity. Young and strong, he walked the dusty roads alongside us, using his time to teach, to heal, to forgive, to break bread with us, to love us. And, with a young man’s grace and grief, he was willing to die for us.

So, did I say any of this to Anastasia? No; I was tongue-tied, worried about overstepping family boundaries. I lost a teaching moment to my waffling cowardice. I simply found scissors for her because she wanted to cut out the icon.

Pondering all this, I think perhaps during some future visit, I will ask what words she’d like to write in the book Jesus holds. I need to trust God on this. After all, she was the one who first chose to color the icon. If God prompted her to make that choice, God may already have the words for her to use.

And maybe then this gray-haired old grandmother, six-year-old Anastasia, and her Jesus can have that conversation…..