‘It is perfectly true, as the philosophers say, that life must be understood backwards. But they forget the other proposition, that it must be lived forwards.’
– Søren Aabye Kierkegaard, Journals IV A 164 (1843)

Teenagers often believe that they are the first humans ever to have discovered sex. The world-altering swells of feeling and emotion—or the seeming opposite of being let down by the whole experience—feels as revolutionary to each of us as any human walking on the moon.

I love this about us as human beings. Each of us is the first me to discover sex, the first to be wowed and underwhelmed and intimate, the first to have this body and this mind and this experience. Our first encounters with living, actual sex (in all of its big and small forms) are so different from hearing about it from friends, classes, or screens.

This distinction between lived experience and hearing about something is not unique to sex—far from it, really—and paying attention to this distinction between knowing and doing is one of the quickest ways to hear what Søren Kierkegaard has to teach us. ‘Knowing something’ is good and important, but it really only happens after it’s over (and only then with reflection, conversation, and struggle).

We don’t encounter life that way; we fumble and trip and stumble into the awareness that comes not from concepts but from living and doing. We think we know how to drive at thirteen, and our imagining it only slows us down when we try to learn the feel of gears and brakes. We think we know how to parent, but long, sleepless nights show us how much we still need to learn. We think we know how to cook until we first fry an egg. We learn so much from our books and concepts, but some parts of being human require lived experience. Our ideas from ahead of time can even get in the way.

One of Kierkegaard’s enduring gifts to us— and a reason why the Church commemorates his life today— is a painstaking writing out and thinking through this difference between knowing and doing. His approach makes him incredibly hard to summarize because his books are experienced as much as read. If I were to tell you (*spoiler alert!*) that Harry Potter defeats Voldemort, I have revealed nothing. The wisdom of J. K. Rowling’s series comes from reading it. It comes from following Harry’s growth as a person and friend who finds what he needs to stand against evil in the only way it can truly be beaten—with compassion, perseverance, support, and sometimes sacrifice. 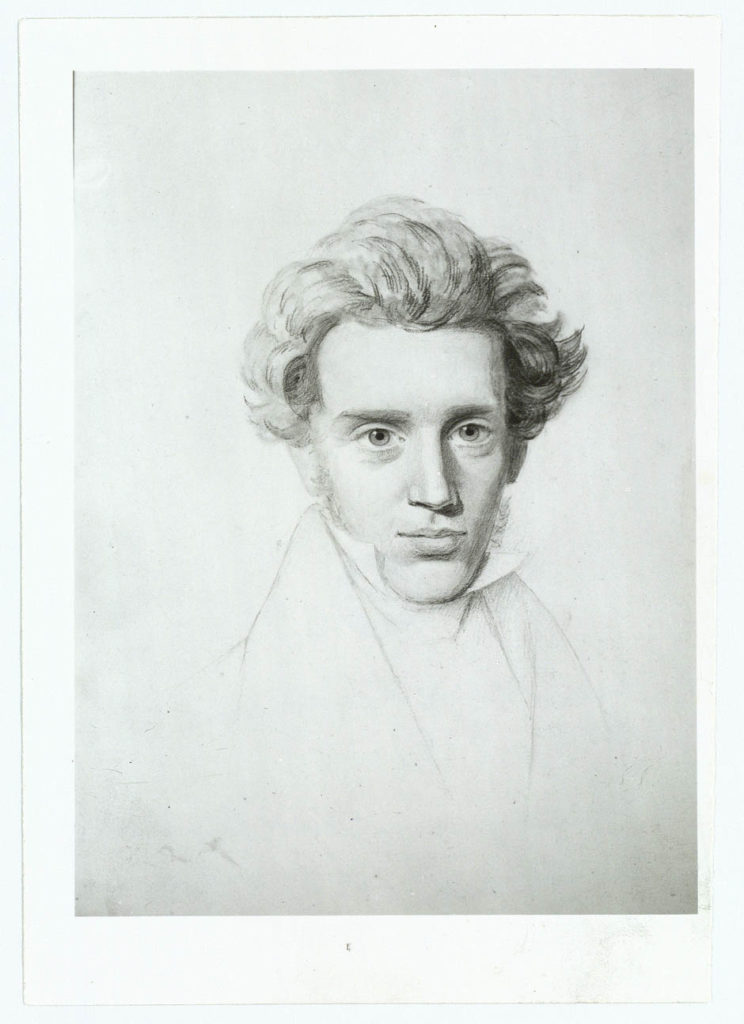 Kierkegaard’s books work this same way. He often takes on a dramatic persona to write them and he performs them for us. If this sounds intriguing, pick up Fear and Trembling, which I think is a nice place to start. It begins with a thought experiment of what doesn’t happen during the Binding of Isaac in Genesis. He wants us to think and also feel about whether our sense of right and wrong should sometimes take a backseat to faith, but that question can’t be answered with an aphorism because it’s not a theoretical question. It is, he wants to say, your child on that sacrificial altar; that feeling must guide our reflection. It has to be experienced, and Kierkegaard draws that out.

Kierkegaard’s point about the difference between a living, existential wisdom and a heady, conceptual knowledge matters at least as much for us as it did for his era in the mid-19th century. It’s easy to notice that life is increasingly reduced to tweets, status updates, and tiny icons that express my feelings for me. It’s not all bad, probably, but it’s a crap architecture for making sense of world-shattering events that are common to us all—love, sex, and death, for starters, but probably also loneliness, ecstasy, and joyful expectation. Faith only occasionally expresses itself in sound-bites, and the bible itself notes that each generation is going to need to renew the covenant in its own way, and that old wine won’t fit in new wine skins. Faith requires living wisdom, courageously and painstakingly worked out. We can’t know our faith in advance; we have to live, reflect, grow, and keep living.