The plague hit our family vacation hard this summer. It was a punishing stomach bug that took down young and old and came back for more. When I was down, Netflix was kind enough to interrupt my helpless binge streaming to inquire, “Are you still watching?” I suppose that feature is enacted after so many iterations of “watch next episode” prompts go unchallenged.

On my first day back in the land of the living, my husband was making an early morning run to fetch saltines and ginger ale and other staples of the post-plague diet. There was a request for Jell-O from someone in the sick bay (or as other renters might have called it, “the beach house”). When I came downstairs, he was already back from the store, and was pouring Jell-O juice into containers so it could begin to set in the fridge. In fact, he had two batches going.

“Oh, you made the Jell-O. That was really nice.”

He looked at me, bemused. “Of course,” he told me. “This stuff takes a couple of hours.”

I feel entirely confident that if I had run this errand, I would have returned from the store, left the boxes of Jell-O on the counter, and felt pleased about having done something kind for someone. I am not a nurse. I’m not being down on myself; I have other gifts. But there is still family lore about the time my then-one-year-old nephew asked for banana, so I gave him one.

“He’s going to need you to peel that,” my sister clued me in.

Maybe that’s why I find the purposeful conviction of Florence Nightingale so compelling.

Born in Italy in 1820 to well-to-do British parents, Florence Nightingale had an early experience of God calling her, and pledged herself to God’s service at sixteen. For her, this meant refraining from marriage, which she believed might encumber her desire to serve God wholeheartedly.

Some years later, Nightingale discerned that the way to serve God was as a nurse, much to the shock of her family. Nursing in that era was a gruesome occupation of last resort. She completed training with an order of Lutheran Deaconesses in Germany, and, thanks to the connections of a family friend in Parliament, was appointed to supervise a London sanitorium.

It was there and in her later service to the wounded in the Crimean War that Nightingale advocated for practices that drastically improved the sanitary conditions for patients, and often relieved nurses at the same time. She innovated a bell system through which patients could ring for aid, and nurses could identify from which bed the call had come. In the sanitorium, she had a series of dumbwaiters installed that systematized delivery of meals to patients on different floors.

In Crimea, she advocated for redress of the unsanitary latrines and hygiene practices, which had led to more patient deaths by way of infection than could be attributed to the war. Later she would emphasize this when lobbying Parliament for protective laws, using pie charts and other graphic illustrations of the data, which was a relatively new means of communicating statistics.

She pioneered ways for convalescing soldiers to send money home and created a writing room that made way for the letter-writing so important to morale and connection with loved ones. Sentimental coverage of her work in newspapers at the time popularized a nickname for Nightingale: The Lady with the Lamp. The Times of London described her making solitary rounds well after the doctors had gone to bed, lighting her way with a little lamp, and bringing hope and a bright countenance to those to whom she ministered. 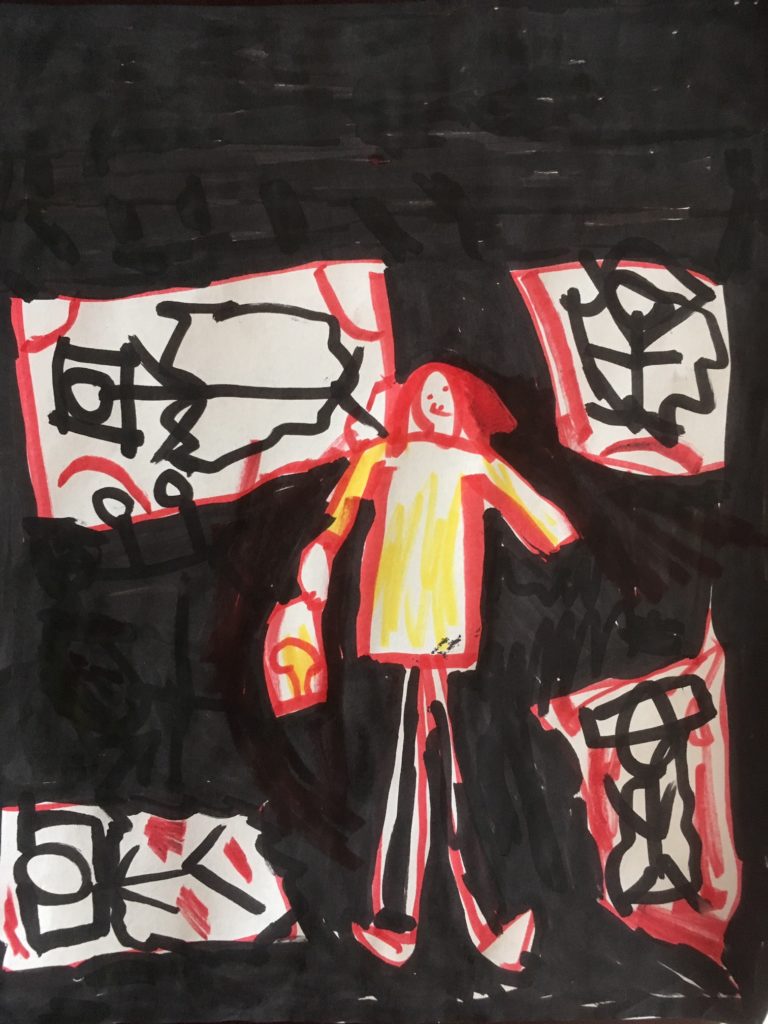 My five-year-old’s depiction of the Lady with the Lamp. I love that the light comes not only from the lamp, but from the figure’s very being. Image by E. Fraser

When the circumstances called for it, she pulled the strings that she could reach due to her family’s social standing, and called upon people in power for favorable attention to the reforms needed in nursing care. There was light, too—making the needs of others known to those in a position to create change.

She wrote prodigiously as well, creating training manuals for nurses. Her belief in the dignity of every patient paved the way for modern standards of nursing practices and ethics, and the Nightingale Pledge was created in her honor in 1893 as an oath by which new nurses would promise to uphold the principles Nightingale worked for. With her writing and advocacy, she illuminated the path forward for effective, compassionate nursing care.

Nursing is neither my sacred calling, nor my natural gift. Perhaps it’s not yours.

But I see in Florence Nightingale an image of Christ, one willing to take a lamp into places of fear and despair—or as today’s collect puts in: “to bear [God’s] healing love into the shadow of death”.

There are shadowed valleys in our world, pockets of hopelessness big and small. They are tucked into difficult relationships and visible in city ordinances and writ large in our social failings around gun violence and racism.

God has given us a lamp to bear. I am encouraged by Florence Nightingale to find the ways my light can shine in the shadows near me.

O God, who gave grace to your servant Florence Nightingale to bear your healing love into the shadow of death: Grant to all who heal the same virtues of patience, mercy, and steadfast love, that your saving health may be revealed to all; through Jesus Christ, who lives and reigns with you and the Holy Spirit, one God, now and for ever. Amen.

[The collet for Florence Nightingale is used with permission from Church Publishing.]