In the Before Times I had an awkward relationship with my at-home Book of Common Prayer. Ordered years ago from Amazon I read it once as you would a novel, cover to cover all the way through. It is still the only copy we own. With its sleek black cover and snap-crackle-pop binding it keeps no secret of its disuse. It appears to be the 1789 version. I think that’s why it’s black instead of red or blue like the faded ones in the church pews.

On loan to me right now is an old red one that seemed ready and waiting for me in the church library, where the chairs had already been stowed on the big conference table to prepare for a quarantine carpet clean. I was there just before our diocesan lock-down. The rector and I squeezed in a last-minute knowledge-swap meeting while my tween daughters, already released from school, partook of the wi-fi in easy chairs in front of the fireplace (surrounded by all those glorious books! It’s horrifying, I know). I gave a quick tutorial on how to navigate Facebook and got a quick tutorial on Evening Prayer. The Daily Office was all new to me and Facebook was all new to him. A few days later we as the clergy and staff started a daily live-stream Evening Prayer on Facebook from our homes, each taking one night per week.

I asked the rector how he decided to have lay church workers participate, including two staff members who’d never done Evening Prayer. He was unfazed, even pleasantly puzzled, by the question. “It is simply the case that ordination is not required to lead any services of the Daily Office. They are liturgies that require baptism, not ordination. It never occurred to me not to have lay folks lead them. If we want more lay people praying the Daily Office at home, folks are helped in that by seeing lay folks leading the office in public.”

They are also helped by jumping in and leading it themselves. I’m proof of that and so is parish receptionist and Monday Evening Prayer leader, Linda. She says, “I didn’t grow up in a tradition of daily prayer in the home. As Roman Catholics we said the Rosary. . . privately . . . Evening Prayer came to me suddenly in this new pattern of daily life under stay at home order.” About the live-stream aspect she continues, “It’s solitary… but it is public. I don’t feel I have a real connection with those watching and perhaps praying along with me. Yet I believe that somewhere someone is praying with me and together our petition and voice is being lifted.”

Robin Wall Kimmerer, near the end of her book Braiding Sweetgrass writes, “Gratitude plants the seed for abundance.” I started that book in the placid, un-knowing days of early February and finished it last week at a time when an American COVID-19 patient was dying every four seconds. In practice, often the sequence of the author’s two three-syllable words are reversed: first abundance, then gratitude. First the gift, then the thank you note. First the harvest, then the thankful family around the table. But now with some scarcity in a land so accustomed to an abundance of everything from freedom and toilet paper to hand sanitizer and yeast, what does that mean? If instead we start with gratitude, our eyes are opened to abundance. Can you really have abundance without first training your senses to perceive it? The ritual of Evening Prayer opens my senses to receive abundance in pandemic. It tethers my spirit, invites a blessed order to chaos.

Technically, I’m sure as an Evening Prayer rookie I’m not doing something right. I don’t, for one, cross myself because I’m self-conscience about it on camera. I’ve never fully known the proper times for it other than at the rail taking communion, but I’ve also never asked. There’ve been a few hiccups with the technology set-up as well. I’m the social media coordinator and yet have struggled with the phone-on-tripod method of self-filming. Something with the wi-fi/phone/Facebook combo won’t let me film horizontally. 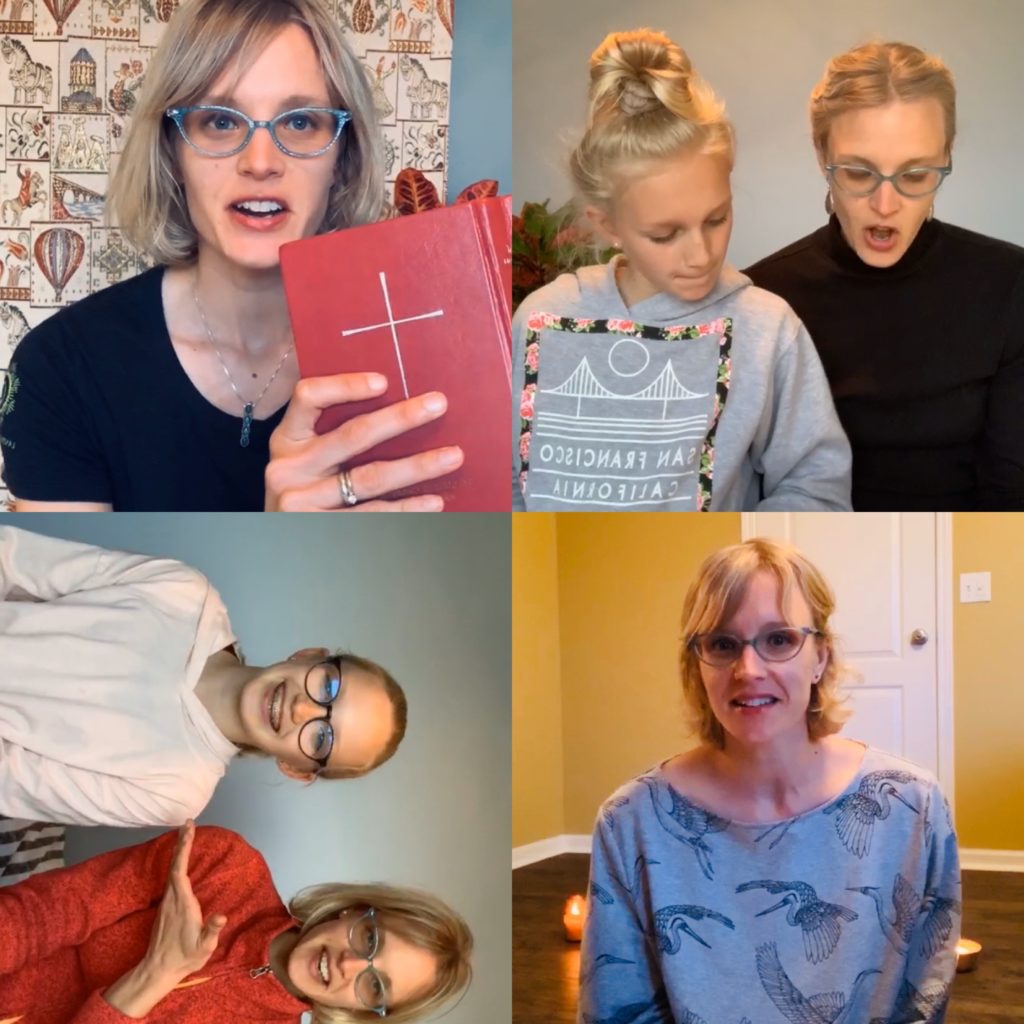 For two Evening Prayers I’ve started broadcasting sideways and had to rotate the phone 90 degrees mid-liturgy. That happened this week when my daughter served as an Eventing Prayer co-officiant. “It’s ok, mom,” she said of it later.  “If it’s perfect, it’s boring.”

In After Times, I hope this will be true of my black still-like-new Book of Common Prayer. I pray it will get more use, be better integrated into life’s rhythms, a resource and guide for centering all the days—un-boring and un-perfect.